What CSV/TSV data is used for

Sports Photo Automation can use CSV or TSV data to customize the compositions on a per image basis. Data functions include the following.

Important: If the cell data contains commas or quotes then you must save the file as a tab delimited .tsv file instead of .csv. Commas and quotes will interfere with the .csv data parsing. Using a .tsv will avoid this problem.

Only use the columns you need – For example, if you are only replacing text in one layer with no resizing, the you only need column A for the file list and column B for the text layer.

Column A – Defines the source file list. If you are doing multiple images per template then add those in separate columns labeled Player 2 File, Player 3 File, and Team File.

Row 1 – This is the header row. It contains the “commands” for Sports Photo Automation to use (layer names, resize methods, etc.). These DO NOT need to be in any specific order.

Data Section – This is everything from below row 1 and right of column A. This contains the data the Sports Photo Automation will use.

Column A doesn’t need any header assigned because that column much be used for the specific purpose of creating the main batch file list. You can add a header to column A if you want but it will be ignored by the software.

For player images or memory mates, column A MUST be used for the Player 1 layer group.

Also, if there is no Player 1 layer group then it won’t process for any players, even is there are groups for players 2 and 3. This is important to know because if you create a template with multiple players, you can’t delete player 1 and decide to use the player 2 group unless you rename the group and all layers in the group from player 1 to player 2.

For memory mates and multi pose images, you can add up to 2 additional player images and 1 team image.

When Processing, all of the player and team images must be in the same source folder.

The header names must be Player 2 file, Player 3 File and Team File. Add the name of the image files into the cell data. Adding the file extension is optional id the file is jpg, tif, png or psd. For those formats it will work with or without it. However, if you have images with the same name but different formats in the source folder (IMG_1234.jpg and IMG_1234.tif) then you will need to add the extension so it knows which one to use. Also, for other formats such a raw .cr2, you would need to add the extension in the CSV data.

The column header name must match the name in your PSD file (it is case sensitive). The example on the right is just an example, you don’t need to use the same layer names as the example.

In the data section, add the text that will be replaced for each image in each layer. 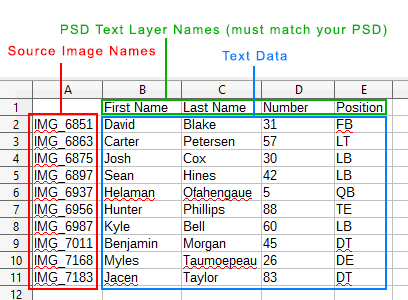 Auto text scaling is optional. If you don’t add this column or leave the cells blank then you can still replace text but not resize it. One example of when you may not wan to use resizing would be jersey numbers if they are either 1 or 2 digitas. You way not want the 1 digit numbers stretching to match the template layout that has a 2 digit number.

How to auto resize the text in batch…..

Add a header starting with “resize-” followed by the Layer Name that will be auto scaled. In the data section, add the scaling method of X, Y or A. The scaling methods are as follows.

A – Scales angled – Note: This will not add an angle to you text. Use this is you text is already at an angle. Sports Photo Automation will automatically determine the angle of the text so it can scale appropriately.

XM – Scalesthe same as X except will only scale if the new text is longer than the text in the template. Shorter text is not scaled.

YM – Scales the same as Y except will only scale if the new text is longer than the text in the template. Shorter text is not scaled.

AM – Scales the same as A except will only scale if the new text is longer than the text in the template. Shorter text is not scaled.

New File Name – This will use a custom file name to use when saving the final image. If the cell is empty then it defaults to the naming that was selected in the Sports Photo Automation Lab user interface.

Player 2 File  – This will add a second image. The image can be another image of the player, a logo image, or any other image that you want to add on a per player basis. The image file must also be in the same source folder that the batch is being ran in.

Save Folder  – This will save in a subfolder of the save folder with the folder name from the cell data. You DON’T need to create the folders in advance. If the folder don’t exist then it will create them. Use this option is you want to separate the finished file by team, product layout, or anything else. If the cell is blank then it will just use the main save folder that you selected in the Sport Photo Automation user interface.

Pre Action 1 (and 2,3 etc.) – Use this to run a Photoshop action on the file before it is extracted. You can run up to 10 actions. They run in sequential order. The column names will be Pre Action 1, Pre Action, 2, up to a max of 10. In the cell data put the name of the Action Set and the Action separated by the “|” character (the one on the \ key above the enter key).

Post Action 1 (and 2,3 etc.) – This is set up the exact same way as the pre actions except the header read as Post Action 1, Post Action 2, etc. The actions run after the template has been completed but before it is flattened and saved.